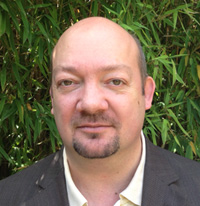 Chris COSSEVIN (52) is a serial entrepreneur based in France. Before moving into the renewable energy field following the introduction of Feed in Tariffs in France in 2007, Chris spent 15 years creating businesses in telecoms, telemarketing and related IT fields. Chris started his career in retail distribution in London and Milan after completing a bachelor's degree in Economics at the University of Bordeaux.

At Solarfarm, Chris's main focus is on the French and Italian PV markets. Despite major market upheavals in recent years, Chris remains very positive and he is currently managing the development of PV projects rights in France. Chris is very positive about the long-term future of the French PV market.

Patrick Naughton (54) is an Anglo-French entrepreneur currently based in Brighton, UK. Previously, Patrick was based in London and Hong Kong and created and led companies in the fields of telecoms, trade publishing, exhibitions and satellite television. Patrick started his career in advertising following a BA (honours) degree in International Relations at Keele University.

Patrick's most notable achievement was the launch of the licensed UK telecoms carrier Telecom One which at its height was turning over £65M per year.

Patrick was attracted to the renewable energy field by the prospect of long-term government-backed contracts in contrast to the volatile world of Telecoms and its ever-changing technologies; he was not expecting the Moratorium in France in 2010!

At Solarfarm, Patrick concentrates on the UK PV market as well as handling group online marketing and databases.